Today is my birthday and I would like a nice gift. As usual, I started reviewing the collections of documents on my past races. Taken by nostalgia, I searched in vain in the drawers for photos of my only two races on 50km. I’m not there, I already knew, but I still have the two medals, a newspaper article and my name mentioned in the pages of a book that tells the 50km at the Italian championships year by year.

Perhaps it is little, yet usually this was enough for me; I carry most of the memories inside me, they were two small feat that are important to me, they contain sacrifices and commitment at the limits of my physical possibilities. But this year I’m angry. I am a man and I know that life is made up of many other problems, but I am also a man of racewalking 50Km, and the fact that the IOC and World Athletics have decided (and re-stressed again) that the 50Km we will see for the last time in Tokyo 2021 I can’t digest it. 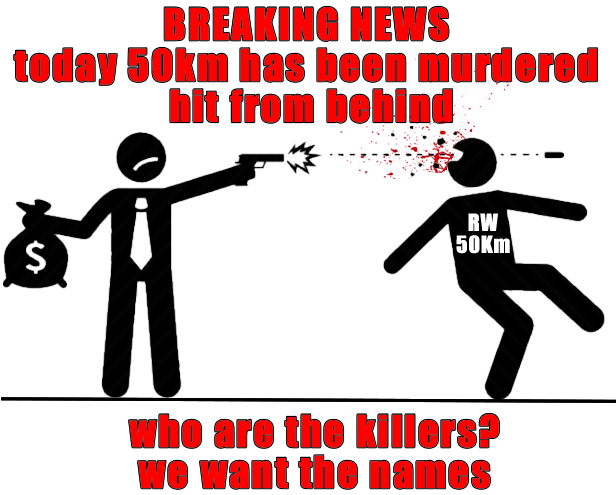 It was 2007 when someone was already trying to ask to cancel the 50Km from the Olympic Games, they didn’t succeed then, but over the years they always tried again until in 2019 the IAAF (now World Athletics) instead of protecting the 50Km and its athletes, killed this sport, because 50Km walking can be considered a sport in itself. That we have heard recently is only further confirmation of decisions already made by unworthy former athletes and unable sports managers who have lost sight of the concept of sport (if anything, they still know what it is). In 2019 a protest was born on the website savetheracewalking.org following the example of the Australian friends of the Victorian Race Walking Club; many joined, champions and non-champions, and I also wrote to President Sebastian Coe a letter, but obviously I never received a reply.

In short, my bitterness in the end does not arise today, it has been constant for some time, it is something that I do not digest.

In a rational way I drew conclusions:
– The IOC already did not want the men’s 50Km and absolutely does not want the women’s 50Km at the Olympic Games, after all in the Tokyo 2021 program the only race that is not for women is that of the 50Km. This in addition to being a hostile act towards us is also misogyny, given that the women’s 50Km with unequivocal time results was proving to be the right card for the relaunch of the whole discipline, and instead the IOC left a shameful hole in the Olympic competitions.

– World Athletics doesn’t care about 50Km, and basically considers the discipline of racewalking a burden. It is always a hostile act towards us but there is more: with the replacement of the 50Km with 35Km in the next world reviews (insane and meaningless choice), betrayal and free disfigurement is also carried out on a real sport that has a never ending story.

– In 2019 it was already known about these bad decisions on the 50Km, many also protested with the gesture of the 50Km (arms crossed in front, left hand open to make 5, right hand closed to make zero). But at the same time other people (managers, walkers, coaches) were indifferent or did and said very little, even those who achieved important results with the 50Km. This was the final insult; after all you can be a great athlete, sports manager, coach of champions, but at the same time it is not said that you are a great man, especially because those who are indifferent are always complicit.

Probably someone did not understand what I mean when I write “hostile act towards us” because I have not specified that I consider myself part of a specific category of people linked to the 50Km. And these people are the athletes of racewalking (from the slowest to the fastest, from the youngest to the oldest, even the former) who respect the 50Km, judges who know the importance of the 50Km race for each participant, real coaches who follow you meter after meter in training, family members who follow you to races and suffer with you, friends who become your biggest fans even though they don’t understand the rules of what you do, because if the 50Km race is important to you it is for them too. There is one fundamental thing that binds all these people: they know what the fatigue of 50km is, they know what that effort is and that strength of mind that drives you to do it. Well, forgive me the other sports, but the racewalking 50Km is something unique that no other sport can match, let alone a 35Km that lacks the most beautiful part, the last, dramatic, unpredictable 15Km.

In short, world athletics doesn’t want us, world sport doesn’t want us, it is a fact. And from here we must start again, opening the new era of 50Km, we true lovers of racewalking 50Km, first of all collecting the adhesions of those Federations that still want to compete in the world championship on 50Km of walking.

I forgot, today is my birthday and I would like a nice gift. And I want to ask who will be next year in Tokyo 2021; we do once again, at the Olympic venue before, during and after the race, the gesture of 50Km. Let’s do it once again on the path or from the barriers, let’s demonstrate our presence.

Because racewalking 50km is immortal.

We use cookies to make sure that you have the best experience on our site. If you continue to use this site, we assume that you are happy.OkDisclaimer & Privacy