The Judges Summary sheet (JSS) is a document also created to give directions to the athlete and his coach, so as to better understand the work of RW judges.

We remember some of the IAAF directives (from publication “Race Walking – A Guide to Judging and Organising”) about the JSS:

– is the official score sheet of the judging of the race, ACCURACY IS ESSENTIAL;
– should be distributed to other relevant people such as Technical Delegate(s) and other Delegates, LOC, Teams (so athletes) and Media within the official results. 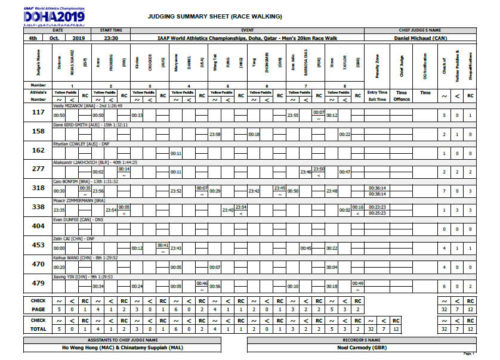 It is no coincidence that the JSS is a mandatory attachment also for the certification of time in racewalking world records. The last aspect to note is that the JSS is a sign of transparency in the work of the jury. For this reason, the spread of this document in “anomalous” formats (for example with the names of judges hidden, as is done in Italy) or the use of the conditional “should be distributed” (instead of the more correct “must be distributed”), are in fact big contradictions.

The careful reading of the JSS of a competition allows to have a complete picture of what happened, or what the judges saw. However, many (insiders and not) do not even know what it is and do not know how to interpret it going beyond the simple reading of the sums or the statistics of cautions and red cards.

I then tried to compare the data of judgment with the trend of performance of the individual athlete in the race. A graphic representation of the mutual influence between the work of the judges and the performance, which can help stakeholders to “read” the race, the coach and athlete to understand the significant moments of the competition, and finally the jury to look at their work from another point of view.

Crossing these data (purely numerical and of time), I will be able to make considerations on the progress of the race (of the single athlete or comparing more athletes) net of what we have seen live. I tried to relate race speed (the evolution of the average speed of the race, the average speed of each km, the time of each km) and trend of the ranking position, with the actions of judges (yellow paddle and red cards) identified at the precise moment (time and kilometer of race) in which they would have occurred.

All this included in an elaborate table that then generates a general chart for one athlete, but which may also generate other types of charts to relate only certain specific data. For example it would be very interesting if other data could be added, such as the athlete’s heart rate each km, or even the meteorological data (temperature, humidity, rain/sun, wind) each km, so as to have a relationship between speed, the judges’ actions, and the athlete’s body stress situation.

Composition of the table

At the top, the identification data of the athlete and the competition in which he competed are to be entered (only in white spaces), including the start time of the race and the rules applied (whether or not there is Penalty zone, if the competition provides or not special powers of the chief judge in the last 100 meters). The names of the judges and their nationality must also be included.

The table consists of the following columns (from left to right):
– Distance: race distance walked. I wanted to divide the distance into fractions of 500 meters because it is useful to have a more precise reference of the moment in which there were any judges cautions or red cards.
– Tot time: is the total walking time per km (values to be entered only in white spaces by copying them from results). As I will have only the time each km, the other time to the 500, 1500, 2500 meters etc. are calculated automatically assuming that the athlete in each kilometer has walked at a constant speed.
– Lap time: is the calculation of lap time every km.
– AVGS Tot: is the calculation of the average race speed that was held until that moment.
– AVGS Lap: is the calculation of the average race speed in the single km.
– Rank: is the ranking of the athlete in each kilometer. Also this value must be inserted only in the white spaces, copying it from the results.
– Day time: is the time (calculated) every 500mt of the race, and allows to identify more precisely in which moments/kilometers of race the athlete has received cautions or red cards.
The rest of the columns allow to enter the times of any cautions and red cards of each judge for that athlete (data that can be easily obtained from the JSS).

Composition of the chart

– Primary vertical axis (left): average speed values in km/h. In order to get a better view of the chart it could be necessary to change the range displayed, depending on the speed sustained by the athlete during the race.
– Horizontal axis: the race distance in meters.
– Secondary vertical axis (right): numbers of cautions/red cards; I entered the maximum value of 6 because in theory it could happen to have even more yellow/reds in a single kilometer, but more than anything else this value is a requirement to avoid the overlapping of the symbols of yellow/reds which can cover other elements of the chart creating confusion in its reading.
– The green line indicates the trend of the AVGS tot; above this line are written values in italics, which indicate the ranking in each kilometers of the race.
– The blue line indicates the trend of the AVGS Lap; above this line the laps times are written for each kilometer.
– If the athlete has received yellow or reds, one or more small circles will be displayed (yellow or red background) containing the symbol of the infringement committed; these circles will be aligned with the moment of the race (the race km) in which the athlete received them. 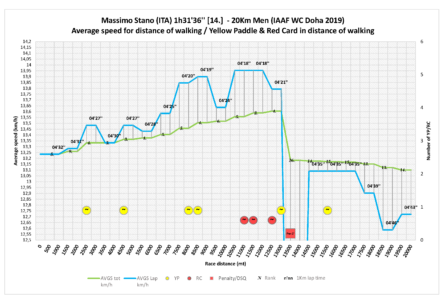 With the data in the table and with the chart I will be able to make a series of evaluations such as:
– Race speed trend and identification of critical moments.
– Distribution of yellow paddle and red cards; if, for example, I see that the cautions are evenly distributed over time or only in the initial phase of the race without red cards, I will be able to suppose that the athlete, although receiving cautions, has maintained a constant technical pace without “worsening”.
– Identification of critical moments with consequences on judgment; if for example I see that there are more red cards concentrated in a few km, it could mean that at that critical moment the athlete has “worsened” his technique.
– Comparison of the speed of race and judgment of two different athletes (comparing the charts of both athletes).

Obviously the considerations can be many others.

In my opinion the use of the table and the relative chart makes sense if the athlete’s data is processed for events in which there are international juries (better if with a high number of judges, for example 8 on the 2Km circuits and at least 6 on the 1Km circuits), not only for the skills of the juries, but for having an unequivocal judgment that would allow us to compare the data of the same athlete in different competitions of the same level. If we wanted to compare the data of an international race with a national level race for the same athlete, it is very probable that the work of the judges would be clearly different between one competition and another, and this could provide unreliable information.

The file is available in this BETA 2.0 version as it is in continuous processing (I still have to make a file suitable for the 50Km which for visual reasons will have a double 25Km chart) and there may be errors.

In the ZIP file you will find:

–  file example.pdf (an example of a result from a data processing  from an athlete who compete in men’s 20Km race in Doha)
– file example.xlsx (excel document, an example already compiled from the same athlete);
– file master.xlsx (an empty excel document to fill out that you will use for your elaborations);
– the results of the men’s 20Km in Doha 2019 with the related JSS (to have the first reference data with which to try an eleaboration).
DOWNLOAD FILE (ver. BETA 2.0)
[JUDGMENT COMPARED TO ATHLETE PERFORMANCE GRAPHIC ANALYSIS]