Santee (USA) – The Anza-Borrego desert is not so far…Nick Christie probably thought also to this, while the most classic of crises tried to sink him. His race was going very regular, but we know that the 50Km reserve bad surprises; so the californian walker had to face a sharp physical drop between the 42nd and the 47th kilometer.  But this did not stop him, the finish was now close and Christie managed to put a bit of brilliance in the athletic gesture of the last 2Km, thus winning a heroic 50Km (at the end of the article the video of his arrival), especially for the final time of 4h09’32”, PB that cancels the old time obtained three years ago always on the asphalt of Santee. Great party for Christie who celebrated wearing a crown, while completing the men’s podium Matthew Forgues in 4h23’28” and Antony Joseph Gruttadauro in 4h45’15”. 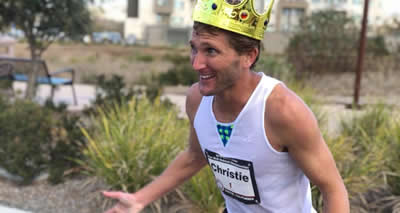 The female 50Km has had an international context, thanks to the presence of non-US athletes. The USATF championship win went to Katie Burnett in 4h47’50”, preceding the godmother of the women’s 50Km Erin Taylor-Talcott (4h50’16”) and the third-placed Teresa Vaill (5h29’29”). The absolute victory however went to the mexican athlete Mariela Sanchez in 4h46’12 ”, after a comeback on Burnett that has materialized with the decisive overtaking of the last 4 kilometers of the race. 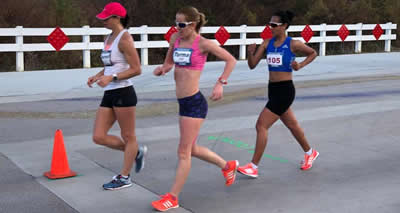 The youth and master competitions have been completed the event.
All results >