In Italian cinema productions the racewalking rarely appeared, compared to other sports disciplines, most of the time in a comical way. Everyone should remember the “little marathon” (in italian “maratonina”) of the film Mamma mia che impressione (1951, directed by Roberto Savarese), with a blond Alberto Sordi in race together with real racewalkers of the period who acted as extras. Among these Mario Lelli (famous for having set the world record for racewalking backwards in 1952), Carlo Bomba (known as Carletto) and Salvatore Cascino (who participated in two editions of the Olympic Games on the 50Km, in London 1948 and Helsinki 1952).

In 1959 it was the turn of  La 100 chilometri (The 100 kilometers), directed by Giulio Petroni, with Massimo Girotti (who in addition to his film career was also a water polo player), Mario Carotenuto (well known for his numerous roles in Italian comedy), the multifaceted Riccardo Garrone and the participation of the famous singer-songwriter Fred Buscaglione. The main topic is the historic race, in fact the plot deals with the sporting events of some Roman walkers during the competition, which are intertwined with the personal issues of each, giving rise to comic curtains and paradoxical situations. The entire film is available online for free (Note: strangely, a warning for content prohibited to minors is displayed, but in reality the film can be viewed by everyone).

The same year Un maledetto imbroglio (1959), noir/crime film directed and starring by Pietro Germi, in which racewalking makes its appearance in a singular circumstance. The police are looking for a man accused of murder, and they find him among the participants of a racewalking competition, he is the athlete number 51; having seen himself discovered, he tries in vain to escape but is arrested and taken to the police station where he will tell the police that he is just a simple thief. The exact point to see the scene is at minute 12 and 10 seconds of the second part of the film.

Another “cameo” of racewalking is in the film Mani di velluto (1979), comedy in which Adriano Celentano also faces a running challenge, but he does so by walking in a caricatured way, mocking the opponent exhausted by fatigue.

Even abroad one must always start from the past, or rather from One Good Turn (1955, directed by John Paddy Carstairs), English comedy. The protagonist is Norman (played by comedian Sir Norman Joseph Wisdom, better known as Norman Wisdom) who, having worked his entire life in an orphanage, considers the staff and children as his family. Norman promises one of the orphans that he will buy a car, but since his salary is not enough, he ventures into amusing and unlikely attempts to earn that money. In one of these he plans a train trip to Brighton, but he loses his pants before boarding and, getting off the train, is chased by the police; to escape the police he disguises himself as a racewalker and sneaks into the last leg of the race from London to Brighton. Norman wins the competition, but fails to sell the silver cup that was awarded to him in a pawnshop, because they think the trophy has been stolen. In the following video is the scene of the race, which was filmed in Crawley, West Sussex.

Then comes the turn of the most famous Walk Don’t Run (1966, directed by Charles Walters), the last film with Cary Grant; is set in the Tokyo of the 1964 Summer Olympics, where a British businessman (Grant), an American racewalker (Jim Hutton, father of Academy Award winner Timothy Hutton) and a woman (Samantha Eggar) have to share a small apartment due to lack of accommodation. In the film there are scenes related to racewalking competitions, with of course other racewalkers act as extras.

Racewalking reappears many years later in the film Doctor Detroit (1983, directed by Michael Pressman), starring Dan Aykroyd (actor and musician who with John Belushi created the Blues Brothers). In the film Clifford Skridlow (Aykroyd) is a naive and young teacher, who spends a peaceful existence between family, home, work and sport. Four beautiful call girls and their “protector” arrive to upset his life. The opening scene of the film is precisely the highlight, in fact the protagonist is going to work just by racewalking.

Six years later there is a small scene of the very famous When Harry Met Sally (1989, directed by Rob Reiner, with Meg Ryan) in which the male lead (Billy Crystal) and a friend (Bruno Kirby), chat in the park while they are (race) walking.

Coming to 2002 there is Walkin’Free, demented comedy short film about a fantasy “long distance racewalker”. The actor Scott Recchia is Seve Freepoontang (mangled name taken from that of the famous middle distance runner Steve Prefontaine), protagonist of this absurd and funny story. A caricature of the walking pace, the ghost of the coach, the conquest of a girl, a challenge to the limit with the most hated of the opponents played by Jon Wellner (later became known for his steady role in CSI Crime Scene Investigation). Only the second and third part of the short film can be found online, while the first part would seem unobtainable.

A year later racewalking is protagonist of episode 7 of the fourth season of the American sitcom Malcolm In The Middle (episode title Malcolm Holds His Tongue), aired in the USA in 2003.

In more recent times there is the Danish Speed walking (2014, original title Kapgang), drama film set over a couple of weeks in 1976. Martin is a promising young walker and he’s making his way. But a heavy shadow falls on his family and the rest of the small provincial town when his mother suddenly dies.

In 2016, racewalking starred in the South Korean comedy Queen of walking (2016, original title Geodgiwang 걷기왕). Man-Bok (played by South Korean actress Shim Eun-Kyung) is a high school student who is forced to walk 4 hours a day to school because she can’t take the bus as she suffers from motion sickness. Man-Bok then discovers that she has talent in racewalking and she decides to train to participate in a national race.

Not a film, but a documentary with the title Una storia semplice (A simple history, year 2017, directed by Giuseppe Garau, author Goffredo D’Onofrio) to retrace, through the testimonies of the people who have been closest to her, the story of Anna Rita Sidoti, Italian racewalker, unforgettable World and European champion, woman and mother, who passed away in 2015 after fighting an incurable disease.

Also in 2017, racewalking also appeared in a children’s cartoon. In an episode of Bernard Bear, co-production Spain/South Korea, there is a nice three-way challenge with a chameleon and a penguin, a competition that will however have an unexpected outcome.

Another cartoon in 2018, in an episode of The Amazing World of Gumball. A short scene in which the characters, who have to shop in a hurry, are forced to racewalk inside the supermarket because it is forbidden to run.

Finally, in the beautiful Another Round (Druk), a Danish film that won the 2021 Oscars for Best Foreign Language Film, the main characters, at the end of a dinner (a little drunk) have fun challenging each other trying to racewalk. 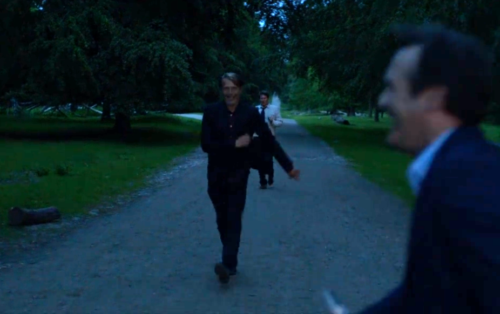 Does the list seem complete to you? If you know of other films, short films or documentaries in which racewalking appears, please report it to our editorial staff via the contact form > Contact Form