Another stop to Alex Schwazer‘s hopes. The Swiss Federal Court rejected, by decree of 11 May 2021, the request for urgent suspension of the disqualification filed by the lawyers of the former South Tyrolean athlete. In detail, the Court held that “there are no conditions” for a suspension of the disqualification or for other urgent measures. Therefore, only the request for review of the sporting process remains in place, for which a few days ago WADA and World Athletics had obtained an extension until 7 June for sending of their briefs. This process will go on for a long time and Schwazer’s chances of Olympic qualification, which were already small before, are now practically zero. 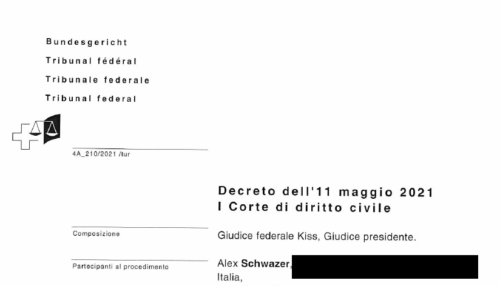 The last chance to qualify for the 50Km is in fact in Podebrady on Sunday 16 May (a race which was already reserved for national teams), while the La Coruna race scheduled for 5 June would remain for the 20Km. Although the lawyer Brandstätter has spoken of the possibility of organizing a race specifically to allow Schwazer to qualify (provided that his disqualification is suspended), this is also an unlikely hypothesis both because it clashes with the organizational regulations, and because in the hypothesized race, which should be set up in record time with the endorsement of World Athletics, at least three international race walking judges should be summoned, also provided by World Athletics.

On May 6, the CAS (Arbitral Tribunal of Lausanne) also rejected the request for urgent precautionary measures that Schwazer had sent in an attempt to have his disqualification suspended. In fact, the former walker coached by Sandro Donati, sent three appeals, one for the review of the sports trial to the Swiss Federal Court (still in place), and two other urgent ones for a provisional suspension to the CAS and the Swiss Federal Court  (both rejected).